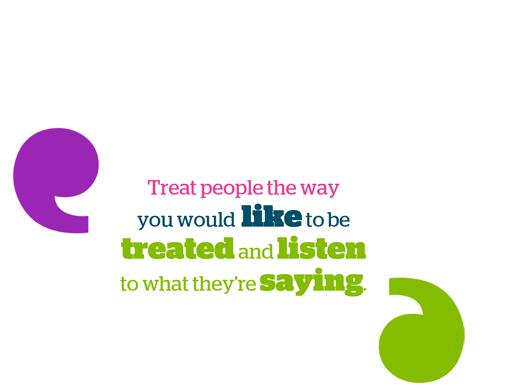 "I try to treat people I cross paths with in the same way I would like to be treated."

You can have all sorts of different relationships that can be fulfilling and rewarding, for example with friends, parents, families, neighbours and teachers. However, relationships aren’t always easy and you might have problems sometimes. Just remember to keep talking to each other. Talking and communicating helps in many ways.

Friends are very important to young people. They are good for mental health, well-being and self-confidence. It’s hard when you argue, and you can feel confused and upset. It’s better to have a few friends who want the best for you than lots of friends who try and make you do things you don’t want to do.

Many young people think that having a boyfriend or girlfriend is the most important relationship - but don’t feel you have to just because your friends are, or do anything you’re not ready for.

"Similarly you may feel put under pressure to be in a relationship which may even include a forced marriage."

Grooming is when someone builds an emotional connection with a child to gain their trust for the purposes of sexual abuse or exploitation.

Sometimes people are not who we think, or want us to think they are. Paedophile networks groom young people, by making them believe they are their friends. They have sophisticated tactics. They befriend young people, giving them gifts, money, drugs and alcohol and use violence and intimidation to control them, subjecting them to abuse.

Children and young people can be groomed online or in the real world, by a stranger or by someone they know - for example a family member, friend or professional. Groomers may be male or female. They could be any age. They are not your friends and you must speak out as soon as you can, before things get any worse.

Sometimes young people can be radicalised into changing their beliefs and groomed by extremists to commit crimes and get involved in terrorist activity.

Sexting is the sending and receiving of naked pictures, 'underwear shots', sexual or 'dirty pics' or rude text messages or videos. This can be via mobile phones, social networks, emails or social apps.

Most mobile phones and tablets have built in cameras and most are linked up to email and social network accounts.

"Police have warned of the dangers sexting can have including loss of control and leaving young people at the risk of being exploited by paedophiles and sexual predators."

Many young people feel under pressure to send nude or sexual photos of themselves, or let others take photos because their boyfriend or girlfriend said “if you loved me you would do this” reassuring them that no one else would see this picture. Photos like these are often not respected and can be posted as revenge or shown around carelessly to anyone else. Once someone hits send, they have ultimately lost control of that picture and where it may end up. Each action online leaves a digital footprint and everything anyone does online is out there in cyberspace even if you think something has been deleted.

"You do not have to feel forced into doing anything you are not comfortable with."

Talk to someone you trust if you feel pressured. Any incidents of bullying are unacceptable no matter where they are and should not be tolerated. Do not dismiss sexist language or behaviour as funny.

Some people feel a need to gain attention and notoriety from the sexting which can often be a result of insecurity or a lack of confidence.

Is sexting legal?
The law is quite clear on sexting. It is illegal to take, possess or share 'indecent images’ of anyone under 18 even if you're the person in the picture. If you are under the age of 18, the law sees you as a child. Therefore, if you have any indecent images or videos of somebody who is under 18 you would technically be in possession of an indecent image of a child - even if you are the same age.